Like many people, this last Sunday night I was tuned into HBO for the beginning of the new season of Game of Thrones.  Also like a number of those viewers I had one of the tie-in beers made by Brewery Ommegang in hand for the event.  Valar Morghulis is a beer I picked up last fall and managed to follow through on my plan to save it until the season opener. 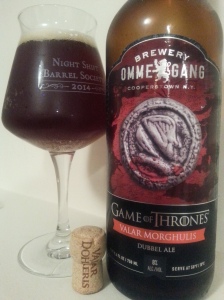 Description: The third beer in the brewery’s Game of Thrones inspired series, its name translates to “All men must die” and was created as a Dubbel to represent a two headed coin given to Arya Stark.  Labeled on the neck, it was bottled on 09/03/2014 and recommended as best by 09/2017.

Pour Info: Poured from a refrigerated 750 ml bottle into a snifter glass.

Appearance: Body starts off a dark copper and fills in to a deep reddish brown by the end of the pour.  A bubbly off-white/beige head forms that gradually fades to

Smell: Smell was sweet and a bit boozy with a nice finish of Belgian-style yeast.

Taste: Dark fruits and a little bit of sweetness with a distinct Belgian yeast characteristic.  Slightly boozy finish that picks up a bit as the beer warms.

Mouth Feel: Medium/Medium thin body.  Super bubbly carbonation that is especially noticeable at colder temperatures.  Feels a bit thicker and less bubbly at warmer temps (which is about where I prefer this beer).

Hype Factor: Cautious optimism.  I’m always a little wary of things that are hyped or try to tie-in to something popular in its own right, but the fact that it’s Ommegang doing the brewing gave me confidence.

Overall: This was a very solid beer and I am glad I picked it up.  If it was regularly available I don’t think I would pick this beer up regularly given the option (the style just isn’t quite where my tastes are at this particular moment), it was very well done and an excellent treat to enjoy while watching the show.  Definitely feel confident picking up another beer in this series, but would most definitely keep an eye on the price point.