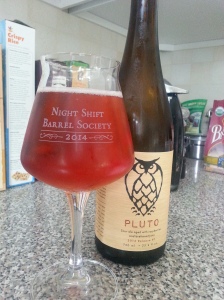 I’ve talked quite a bit about the Night Shift Barrel Society beers on tap so far here but haven’t really gotten into the bottles too much. The other day I was looking to treat myself and wound up opening one of my 2014 Barrel Society beers. Pouring this time was Pluto, the final release of the release of the 2014 lineup. The first and last time I got a chance to try this beer was back at the beginning of the year when I thought it was a good and that it might prove interesting with some age on it. Let’s see how it did.

Description: A sour ale aged with raspberries and brettanomyces. Lots and lots of raspberries. Bottled on 12/23/2014.

Pour Info: Poured from a refrigerated 750 ml bottle into a snifter glass.

Appearance: Pours a pinkish golden orange with a lively and fizzy white head.

Smell: Sweet berries with just a hint of the tartness to come.

Taste: Lots of raspberry tartness upfront, followed by sweetness that transitions into a bretty funk that peaks at the finish. Compared to my first tasting, I would say the berry tartness remained high while the funkiness picked up a bit. The beer certainly aged well and perhaps even improved itself a bit.

Mouth Feel: On the thicker side of medium, perhaps a bit more than I recall, and a bit bubbly. Complements the beer nicely.

Overall: I really liked this beer and found it a worthy addition to the Barrel Society lineup. Fruity sours are a style Night Shift really does quite well and with a little bit of age on it I think this one is now a step above their seasonal Weiss series.