Last weekend I was introduced to Rushing Duck Brewing Company from Chester, NY when a friend gifted me one of their cans.  I didn’t really know a lot about these guys beyond seeing a check-in to them every now and then, so let’s break out a long form review and see what kind of first impression they made. 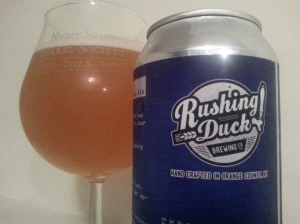 Description: Their website described as a West Coast-style IPA, brewed with Pilsner malts and a mix of Citra, Mosaic, and Simcoe hops.  The can calls it an “Imperial Session Pale Black Indian Pale Ale.”  I see.  Well, it is most certainly the former.

Pour Info: Poured from a refrigerated 16 oz. can into a snifter glass.

Appearance: Pour was a cloudy pale yellow body with a bit over a finger of foamy white head.

Smell: As soon as I opened up the can I got a nice burst of tropical fruits and a hint of piney hops.

Taste: The taste was a sticky sweet mixture of hops and tropical fruits, pineapple in particular.  Upfront the beer was mostly sweet and it picked up some subdued, resiny hops as it went on.  The hops never really took over the sweetness, but were definitely apparent throughout the beer.

Mouth Feel: I found this beer a bit thicker than I might have expected, on the upper end of medium.  Carbonation was on the lower end for the style.

Hype Factor: Curiosity levels were elevated due to the circumstances in which it was received.

Overall: A mighty fine beer, but I have could have done with just a bit more bitterness to this one.  While I wouldn’t rate this in the upper echelon on account of that, it is certainly something I would try again.