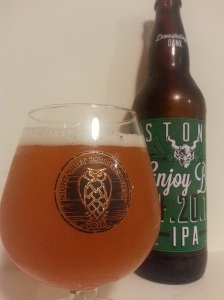 With the “expiration” date of Stone Brewing Company’s latest Enjoy By release fast approaching, I decided it was time to open this bottle up.  I have been a fan of the Enjoy By series going back to some of the first releases in 2012, though for some reason I haven’t picked one up in a while.  Now was as a good a time as any to put a change to that.

Description: Brewed “not to last,” Stone’s Enjoy By series of double IPAs champions the brewery’s commitment to proving hop forward beers as fresh as possible.  Bottled on March 16, 2016 they rather explicitly gave this beer a shelf life of just over one month.  The typically verbose description on the label can best be summed up by their “devastatingly dank” catch phrase.  Poured from a refrigerated bottle into my snifter glass on 04/17/2016.

Appearance: The beer had an opaque golden orange/amber body topped off by a fluffy white head that formed during the pour.  The head steadily fizzled away to leave some foamy lacing on the sides of the glass.

Taste: As suggested by the label, the beer was aggressively hoppy and started out with a mix of earthy and piney bitterness.  This was followed by a sweet a tropical fruit taste, most reminiscent of pineapples.  The finish drew once again upon the hops, with a sticky, dank bitterness joining forces with a slightly dry light malt presence.  This combination served to both highlight the bitterness and bring the beer to a crisp ending.

Mouthfeel: Medium bodied with a moderate amount of carbonation.  It also had a fluffy, sort of dry feeling at the end of each sip.

Hype Factor: The series is certainly well-regarded and anticipated, though the hype surrounding these releases has dimmed somewhat in the last year or so; likely due to more frequent release schedules and a greater amount of product hitting the shelves.

Overall: Excellent beer and definitely worth the pick up.  As an additional bonus, the $8.99 price tag for the bomber was a pretty good deal in today’s market.  Certainly a series to keep an eye out for and one that I am likely to start following again.