My first porch beer of the year!  I am celebrating the occasion with another session beer, this one with an offering from Brewmaster Jack.  I’ve really enjoyed some of their beers in past entries, and was particularly impressed by Total Eclipse, their rye porter, when I had it after work the other day.  Sticking with my session beer theme, though, it’s the Stray Dog Lager that got the nod for this review. 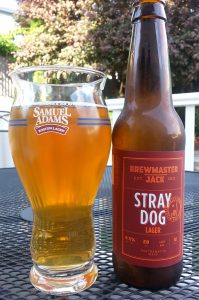 Description: Described by the brewers as a “distinctively malty” amber lager brewed with two row barley, crystal malt, and Munich malt.  I’ve been feeling a need to diversify my choices in glassware lately, so I poured this beer into a Sam Adams perfect pint glass.

Appearance: It had a cloudy golden/light copper body with a wispy white head.  A steady stream of bubbles ran up the middle of the glass.

Smell: Sweet, much more so than expected.  A bit of lager yeast as well in the background.

Taste: Upfront there was a surprising sweet, tart, and almost funky dark fruit character with a touch of lemon zest mixed in.  Underneath the sweetness was a more traditional blend of light malts and lager yeast that stood out a bit more once the initial tastes faded a bit.  For the finish there was a toasted malt character that picked up some bitterness as the beer warmed.  There was definitely a sweet spot in terms of temperature where this beer tasted alright, but otherwise something seemed kind of off to me.

Mouthfeel: The beer was pretty smooth.  It featured a full body that felt on the thicker side of medium with a slightly less than moderate level of carbonation despite the aforementioned bubbles.

Hype Factor: Just my own excitement.  I’ve become a fan of this brewery and wanted to branch out and try a greater variety of their offerings.

Overall:  I was confused by this beer and wavered a little bit as about posting this review, mainly  because I was not sure if the funky fruit taste I got was intentional or if I happened upon an off bottle.  I looked up some other reviews to see what people were saying and since it didn’t seem to be totally out of line with what other people were getting (and a number of those people liked it), here we are.  The beer was definitely a surprise, but not the kind I was looking for.  Definite miss for me.  With this coming on the heels of having really enjoyed the Total Eclipse porter, I was also a bit disappointed that this is the offering I had lined up to feature here.  Live and learn.