My wife and I had friends in town last weekend and during their time here we shared a some great brews.  Being the awesome people that they are, I also ended up with a few treats from the Mid-Atlantic region left behind in my beer fridge.  Guess I know what I’ll be drinking for my next few posts. 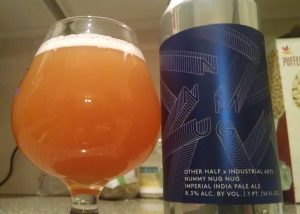 Description: It was tough to track down an official description of this release, so I’ll start out with the obvious statement that this was a collaboration between two New York State brewers.  You can get a bit more of that story from Instagram.  It looks like there were two canning runs of this, mine coming from the initial 01/27/2017 batch.

Smell: A whole lot of sweet tropical fruits.  I picked up on mango, apricot, and pineapple in particular.

Taste: There was a haze of dank, bitter piney hops that hung over this beer right from the start.  It began somewhat mildly and steadily built up to giving a bit of bite on the end of each sip.  Underneath this was a subtle tropical fruit and melon sweetness, along with some light bready malts.  On the finish, the hops were joined by grapefruit bitterness and a touch of heat that maintained itself at a pretty low-level throughout the pour.

Mouthfeel: Medium-plus body, with a moderate amount of carbonation that was most noticeable towards the end of each sip.

Hype: Elevated.  Other Half seem to have, rightly so from my experiences, Trillium levels of excitement within their sphere of influence and a collaboration beer is especially interesting.  I also know that the person who gave me this doesn’t mess around with her beer, giving me another reason to be excited.

Overall: I suppose I ended up coming across this brew a bit later than a lot of other people drinking or reviewing it, but that didn’t stop me from really enjoying it.  I was actually a bit surprised by the taste, I had gone in expecting a juice-bomb based and ended up with something a bit more balanced.  Sure the hops were on the aggressive side, but never to the point that they were overbearing, leaving the beer somehow more balanced than not despite the relative subtlety of the other flavors.  Overall a very nice brew that maintained my opinion of Other Half and made me really curious to try out something from Industrial Arts.