I am probably fashionably late in celebrating this occasion, but I figure I’m OK since this wasn’t exactly a personal milestone. 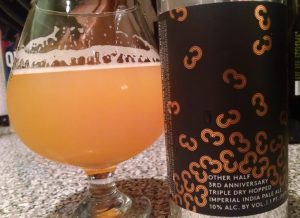 Description: I’ll just come out and say it: I got lazy this time.  Given the lack of clear and easy to locate official information about this release I went to Beer Advocate for my description.  This triple dry-hopped features “copious” amounts of Citra, Motueka, Galaxy, Simcoe, and Citra Lupulin powder.  The can was dated 01/27/2017.

Smell: Lots and lots of tropical fruit sweetness with a touch of bitterness in the background.

Taste: Bursting with fruit upfront, lead by pineapple, mango, and apricot.  A sweet and piney bitterness gradually built up toward the end and lingers for a bit after the sip.  There was also a hint of bready malts underneath this all, giving the flavors a nice smoothness which gave absolutely no indication of the higher ABV.

Hype: It sounded like there was a ton of hype around this release, which I guess is to be expected when a popular brewery makes a special release these days.  Based on the ratings I saw in the link above, it looks this was well received.

Overall: Very impressive.  Something about this beer just made it really relaxing to sit down and drink it.  It managed to impart all the juicy highlights of the style without being overly aggressive in the process.