Apparently the ninja won the battle, though it was the unicorn that won the war by getting featured in another brew.  This next beer caught my attention by being a style that I love and by having some pretty cool can art, featuring the most bad badass zombie/metal unicorn ever.  I have a steady supply of brews left to get through now that Halloween is approaching and this seemed like the perfect way to lead the charge! 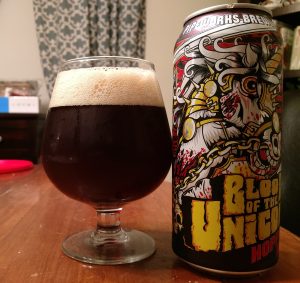 Beer Name: Blood of the Unicorn

Description: Not much official information to go by other than style description.  I’ll add that this particular can was born on the day of my anniversary (9/18), which was a nice coincidence.  I think the single can cost me $3-4, with a four pack going for $11.99 in my area.

Appearance: It had a deep reddish-brown body with thick, foamy light tan head.

Taste: A slightly more subdued version of the smell.  There was some malt sweetness upfront, but piney hops were clearly the stand out flavor on the front end of this beer.  The finish did see a return of sweetness in the form of caramel malt and a bit of brown sugar.

Hype: I don’t think this is particularly hyped in the beer community at large, but I was immensely excited to try this.  I love the style and really enjoyed that other unicorn themed beer from this brewery recently.

Overall: I thought this was pretty good, though as I am always quick to point out, in being such a big fan of this style I am fairly particular in what I want out of it.  This may sound blasphemous, but I wish the malts stood out a bit more.  The bitterness level was fine, I just would have liked the malt profile to have been on a similar level.  This might be a “me thing” though, so don’t let that stop you from checking this out.  I do wish I had bought more than just the one can I used for this review.