Purchased shortly after it was bottled back in December 2016, for one reason or another I never got around to drinking this until the other day. 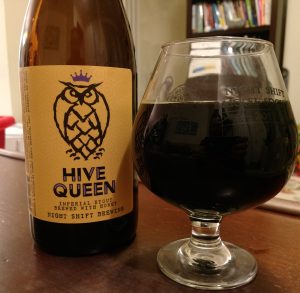 Description: Bottled in December 2016, this Imperial Stout was brewed with honey to give it a bit of extra sweetness and body.  An old tweet from that time informed me that it cost $12 for the bottle.

Taste: Opened with rich dark malts before getting progressively more roasty.  The beer finished  with subtle honey and moderate amount of heat mixing into what had become an elevated roast coffee flavor.  Aftertaste was a boozy mix of honey, bitterness, and roasted coffee.

Mouthfeel: On the thicker side with low carbonation.

Hype: This had been released to some fanfare around a time I recall the brewery putting a number of well received stouts.  I was also happy to finally get to open this after seeing it in my fridge for so many months.

Overall: Unfortunately the wait wasn’t really worth it for me as I was not a fan.  The beer was a bit roastier than I typically prefer, though I was actually fine with that until the finish set in.  I felt like the beer unraveled at this point as the competing flavors and noticeable alcohol did not come together well.  I also found myself wishing that the honey took on more of a role throughout, though I can’t say for sure if it had originally or not.  I’ve been having some pretty mixed luck with my review beers this year, but I do expect to start turning that around real soon.