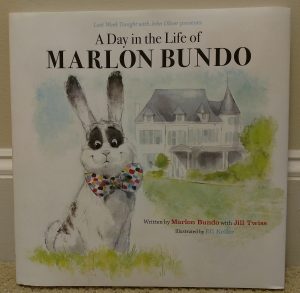 As the father of a soon to be two-year old, I read a whole lot of children’s books on a daily basis.  While I have never felt the compelling need to review any of these, this one was different and as soon as I found out that it was making the rounds at my son’s playgroup I knew what I had to do.  I’m guessing most of you are aware that this story was written in response to a children’s book published by members of Michael Pence’s family about their pet bunny.  Looking to call out the Vice President on his homophobic beliefs, the creators of this particular story have imagined said pet falling in love with another male bunny.  This book has been featured prominently on Last Week Tonight with John Oliver and all proceeds from it benefit AIDS United and the Trevor Project, which provides suicide prevention services to LGBTQ youth.

This is the story of an exceptional day in the life BOTUS (Bunny of the United States) Marlon Bundo, beloved family pet of Vice President Pence.  Marlon’s day starts out like any other by watching the morning news with Bunderson Cooper, ignoring his boring grandfather, and hopping about the White House premises.  Everything changes, however, when he spots a dashingly handsome boy bunny named Wesley and the two fall in love at first sight.  Standing in the way of their happiness is President Stink Bug, an abrasive, boorish creature with a bad toupee that does not approve of their relationship.  Fortunately, with the help of their animal friends and a timely civics lesson, Marlon and Wesley learn that it is okay to be different and are able to live happily ever after.

I thought this was a cute, fun read that delivered an important and positive age appropriate message to children about embracing each other’s differences and the importance of our right to vote.  Given the specific nature in which it parodies both Donald Trump and Michael Pence I don’t think this will age well enough to go down as an all-time classic children’s story, but it will put a smile on your face and I highly encourage giving it a read.  So long as you’re predisposed to its political leanings you’ll enjoy it whether you have kids to read it with or not.