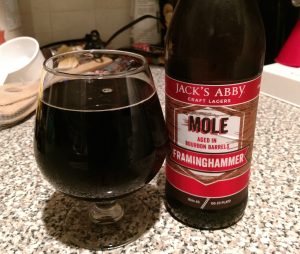 Description: A variant of the brewery’s popular Framinghammer porter aged in bourbon barrels with cocoa nibs, chili peppers, and cinnamon sticks.  Read about how it all comes together here.

Appearance: Poured a thick dark cola brown/black body with a minimal amount of fizzly tan lacing around the edges.

Taste: Creamy chocolate and sweet dark malts upfront were joined mid-sip by rich grains and a hint of cinnamon.  Finish is warming in more ways than one with chili peppers blending in boozy bourbon barrels influences.

Hype: Framinghammer and its variants are all well-respected, sought after brews but hype isn’t necessarily the right word here.  Jack’s Abby has sufficiently upped its production and distribution to the point that anyone who wants these can get them without lining up or having to put in a lot of legwork.  The bottles don’t sit on shelves long, but they are readily attainable (at least in my area).

Overall: The brewers hit their mark on this one a delivered a beer that clearly brings to mind the food that inspired it.  I don’t think this is something I would want all the time but would consider it again as a novelty dessert beverage.   The chocolate notes stood out nicely against the heat in the finish and the interplay between the different components kept me going back for more.  Best you enjoy this one slowly (and, of course, responsibly).

The more beers I gave from this brewery, the more and more I like them.  I’m just about at the point where I’m grabbing anything new these guys that I see. 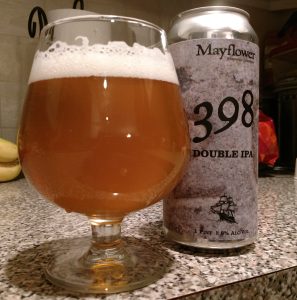 Description: Brewed to start a countdown towards the 400th anniversary of the founding of Plymouth, MA (coming up in 2020), this double IPA features a pale malt base and an abundance of Simcoe, Mosaic, and Nugget hops.  My can was about two weeks old when I opened it up.

Appearance: Cloudy golden/light copper body through which I could just barely make out my fingers on the other side of the glass.  Up top, a foamy white head formed with the pour.

Taste: It started out with a sweet, creamy blend of tangerine, orange, and melon coming out on top of the pale malt base.  The finish had a subdued grassy bitterness that blended into a mild layer of grapefruit and citrusy hops.

Mouthfeel: Creamy, just above medium body with a slightly less than moderate level of carbonation.

Hype: Despite the brewery being pretty well-regarded, this release did not come with any particular hype associated with it.

Overall: Really smooth and relaxing to drink, it offered a great combination of flavor and subtlety that I really enjoyed.  Do yourself a favor a grab a can (or four) of this next time you see it. 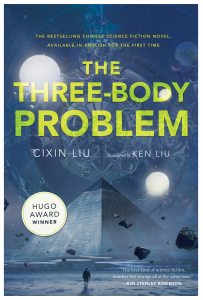 It was with great anticipation that I watched my place on the library hold list for this book move closer and closer to the top.  Originally published in China back in 2006, it won the country’s highest Science Fiction award that year and subsequently soared in popularity.  The English language translation was released in 2014 with much fanfare and ultimately took home the 2015 Hugo for best novel. With all that excitement and praise, I couldn’t wait to see what the buzz was about.

The story begins at a university in Beijing during the height of the Chinese Cultural Revolution.  Here we meet a young astrophysicist named Ye Wenjie who watches her father get publicly executed by Red Guards after refusing to denounce scientific theories deemed counter-revolutionary.  A few years later Wenjie becomes caught up in a political scandal of her own and avoids significant prison time by agreeing to work in seclusion on a top-secret government project aimed at contacting alien life.  The story then skips ahead to the present day and introduces another Chinese scientist named Wang Miao, a leading researcher in the field of nanotechnology. An amateur photographer in his spare time, Miao discovers a countdown has begun appearing in the background of photos he develops in his dark room.  Deeply troubled by his inability to make sense of the phenomenon, he sets off on a desperate search for answers that leads him into both the world of a highly technical online strategy game and a real-life battle being fought at the highest levels government over a decision made by Ye Wenjie decades ago.

Fascinating and full of suspense, I had a hard time putting this story down and finished it rather quickly despite some dense content.  There were a few times where I wished I knew a little (or maybe a lot) more about physics, in particular dimensional theory and the gravitational problem from which the books draws its name, but nothing was ever so technical that it lost me.  Indeed, I found the concepts and technologies explored here incredibly interesting and was even inspired to do a little outside research to plug some gaps in my scientific knowledge.  Despite this extra bit of reading, my need to uncover the connections between Wang’s experiences and Ye Wenjie’s past drove me forward at a relentless pace. Though I did have some minor nitpicks about how the story played out, most notably Wang’s family disappearing from all consideration after the start of the book, on the whole I really enjoyed this and would recommend it to science fiction fans.  I particularly liked how timely the story seemed considering recent articles covering the late Stephen Hawking’s warnings about contacting alien life and China’s recent investment in its own SETI program.  I am definitely on board for the next two books in the series.