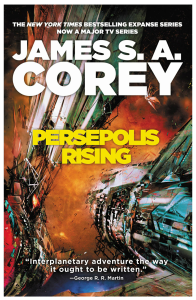 It’s been a little while since I last checked in on the Expanse universe, but here we go with book number seven, published in December 2017.  Any long time readers of the blog out there may recall that I’ve had a rather up and down relationship with this series, going so far as to declare that this book was going to make or break me sticking with it.

The action picks up about 30 years after the end book six, Babylon’s Ashes.  The forces of Earth and Mars have united and are gradually recovering their strength following their destructive war with the Free Navy.  Colonization through the ring gates has continued at a rapid pace and outposts of humanity are now scattered across hundreds of worlds held together by the Transportation Union that grew out of the Belt factions that opposed Marco Inaros.  The relative peace and prosperity of this new era is shattered, however, when Medina Station receives a message from the Laconia colony announcing an imminent return of the Martian forces that went into a self-imposed exile from the Solar System several decades earlier.

I’ll admit I went into this book with fairly low expectations but must say that I ended up being quite pleased with it.  Previously I had lamented the disappearance of both the protomolecule and renegade Martian fleet from the forefront of the story, but it seems like the plot has finally switched focus back to these arcs.  The book moved along a quick pace and I actually enjoyed spending time with Rocinante crew again.  I found it particularly satisfying to watch them navigate a new group dynamic that emerges and I similarly found their time spent as resistance fighters on Medina rather exciting as well.  On a larger scale, I thought the quick progression of the Laconian conquest was just a little too neat and tidy, making me to think that is how it will be wrapped up as well, but for now I am just going to be content that my interest in the series has been renewed.  The story did a really good job minimizing the things I’ve found most annoying about the series, namely how the universe tends to get held captive by James Holden’s poor decisions, while offering up plenty of what it does best by bringing the conspiracy and protomolecule storylines back to the main stage.  Also to that last point, I don’t think I’ve yet given this series credit for some of the other things it has done well throughout its run. There is an excellent diversity of characters portrayed, indeed people of all shapes, sizes, races, and orientations are well represented in this future, and it addresses certain logistics of traveling, communicating, and fighting in space in ways many other books of this genre tend to gloss over.  Beyond all that, several of the characters have wonderfully cynical outlooks, best represented here by what is one of my favorite quotes so far this year:

It’d be a better world if there was always at least one right answer instead of a basket of fucked. – Chrisjen Avasarala (of course).

I’m a bit wary of saying this, but I am now officially on board with finishing the series.  With only two books left to go (one coming out at the end of this year and the finale planned for 2019), I figure I am now in too deep to stop now, especially since this book got me legitimately interested again.