For those of you not from the Boston area, Keytar Bear is a beloved local street performer who appears at subway stops and other hotspots throughout the city dressed in a bear costume and playing a funky keytar.  He’s unable to perform this summer after getting injured in a motorcycle accident, so Trillium is donating some of the proceeds of this beer to his recovery effort. 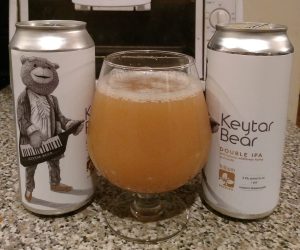 Description: This release was originally planned to coincide with Keytar Bear playing a gig at Trillium’s beer garden, but the brewery moved up their brewing schedule to help out the injured performer.  You can find the full specs of the beer here, but to summarize it is a double IPA brewed with wildflower honey, lactose, and vanilla beans and hopped with Citra and Galaxy.  Cost is $22.20 for a four pack or $5.05 a can if you want to buy singles.

Appearance: It had murky and nearly glowing yellow/light orange body topped by a thick foam that steadily bubbled away to lacing.

Smell: A combination of vanilla, cream, and hazy tropical hops.

Taste: Started out with orange and tangerine sweetness coupled with a fruity/floral bitterness.  Honey and heavy cream came in shortly thereafter with vanilla popping up just before the finish.  Tropical fruits reasserted themselves on the end and brought the beer into a sweeter finish that packed a bit of heat in the form of alcohol and raw hops.

Mouthfeel: Thick, creamy body with a bit less than moderate level of carbonation.

Hype: High.  I thankfully didn’t have to wait in line for this (my guess based on the one case purchase limit is that they brewed a lot), but the brewery was a bit busier than I usually see it on a weekday afternoon.  Local media also picked up on this release, so there are a whole bunch of news articles out about it as well.

Overall: This was a really interesting brew that offered a wide range of flavor.  On the whole I really enjoyed this, but there were a few sips where I thought that either the vanilla came in too strong or the ending was just a bit too hot going down.  I may sit on my other can a week or two to see if any changes develop. Definitely worth checking out though.