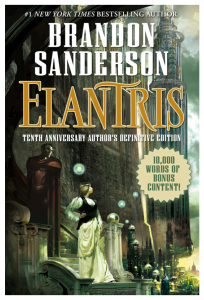 After a brief hiatus, I have made my return to the Cosmere by going all the way back to its origins.  Published in 2005, Elantris is not only the first book set in this universe, but it is also Brandon Sanderson’s first published novel.

The story takes place on the planet Sel, an Earth-like world that is home to another civilization of humans advanced to roughly the middle ages.  Once a beacon of magic, culture, and technology, the city of Elantris was the center of a prosperous civilization. Its residents were selected by a process called the Shaod, a mysterious phenomenon that would transform them into beings with silver skin, white hair, and enhanced physical and restorative abilities by granting them access to the AonDor, a system of magic based upon drawing symbols.  That all changed, however, when an event called the Reod mysteriously transformed the nature of Shaod roughly ten years before the start of this story. Instead of bestowing physical and magical gifts upon its recipients, they are now afflicted with discolored skin and have become doomed to live on in anguish from injuries that will neither heal nor kill them. In response to this change, the city of Elantris was sealed off as a de facto prison for anyone touched by the Shaod, a circumstance enforced by the church of Shu-Korath and the King of Arelon, an influential nation whose capital city of Kae lays in the shadow of Elantris’ ruins.

It is here that we meet our protagonists, Prince Raoden of Arelon and his fiance Princess Sarene from the prominent sea-faring nation of Teod.  The two were set to be married in order to secure an alliance between their nations, the last remaining bastions of the Korathi religion and the lone holdouts again the forces of the Fjordell Empire and the Shu-Dereth faith advancing across the continent.  Days before the wedding, Raoden was taken by the Shaod and discretely exiled to Elantris. Upon her arrival in Kae, Sarene is informed that Raoden has died of a particularly ravaging disease, a story she finds deeply suspicious. Determined to secure a place for herself in Arelon’s court, she embarks on her own private inquiry into the matter and quickly becomes fully enmeshed in the political intrigues of her new home.  Roaden, meanwhile, is determined to learn more about the changes in Shaod and works in secret to improve the lives of the people within Elantris. Threatening them both, however, is an ambitious Derethi priest seeking to gain a foothold in Arelon as a prelude to invasion.

There was a lot about this book that I really enjoyed.  Both Raoden and Sarene were excellent, likeable characters and I felt invested in their stories right from the start.  I particularly admired their integrity, intelligence, and sense of social justice and found these traits excellent counterpoints to the other leaders’ tendencies towards exploiting their subjects’ basic needs and prejudices for personal gain.  The supporting cast was equally impressive, with a well-written and intriguing list of friends and foes alike. The story itself, though more focused on intrigue and politics than the more action packed novels that follow it, was quite engaging as well.  No spoilers, but Sanderson usually writes an exhilarating ending to his books and this one was definitely no exception. Finally, I took much joy in catching references to things that come up in later books. Even though this was my first visit to Sel, I’ve come across a few Elantrians before and noticed that Nazh left his now familiar marks here as well.  What got me most excited though was the appearance of Hoid. What was he trying to accomplish here and how does it impact his other travels? Also along this line of thought, I am also very curious to find out more about the Shards and Investiture native to Sel beyond what I’ve pieced together from other sources. It feels like there is a lot of unfinished business on this world, so hopefully someday I will get answers.

My main criticism of this book was that I didn’t think it had quite the same epic feeling as Sanderson’s later novels.  A big factor in this is surely due to me reading an early work after already being so immersed in Cosmere lore, though not having the now-customary quotations or in-world excerpts starting each chapter did contribute greatly to this feeling.  Whatever the reason, the story felt very insular to the cities of Elantris and Kae without expanding out into the rest of Sel as much as I would have liked/expected. I also noticed a few events and ideas used in this book that got picked up and reused in later novels as well which left some scenes feeling less fresh than they probably would have otherwise.

Putting that aside, I am happy to have finally visited this world and upon finishing the book found myself thinking about where my next stops in the Cosmere will be.  After a bit of thought I’ve given myself the goal of taking two more adventures there this year. My first stop will be Warbreaker to follow-up on a few references I missed in Oathbringer and then from there I am thinking that I may dive into the Arcanum Unbounded, a collection of short works that takes place throughout various worlds in the Cosmere.  I have a few other things lined up to read before those happen, but something tells me I won’t be able to stay away for long.