With Halloween right around the corner, I went searching for ideas on how to mix up my anticipatory posts.  That quest led me to this fun tag, which I found on another blogger’s page (thank you Madame Writer). This is a long one, but it sure did get me ready for tomorrow night!

It’s really hard to pick just one, so why don’t I refer you to the Halloween music post I did yesterday?  Gut answer is probably Black No. 1 by Type O Negative, but I reserve the right to change my mind a few times.

2. Name something you wouldn’t want to run into in a dark forest or in an abandoned building.

I suppose any number of things would fit here.  I’d hate to run into a murder-hobo or something like that in either location, nor would I especially like to come across a bear while hiking.

3. Have you ever played with a Ouija Board?

I’m going to confess now that I’m not all that into horror so picking a favorite is hard.  I was really into monster movies as a kid, though, so does Godzilla qualify? If not maybe I’ll pick the Shrike from the Hyperion novels.

5. The creepiest thing that’s ever happened while you were alone?

I’ve seen some weird/crazy stuff in my younger days, though most if not all of the truly creepy or weird can be attributed to my, er, state of mind at the time.  Setting those experiences aside, in everyday life I really have only had more run-of-the-mill random house noises or centipede in the basement type things happen.

6. If you were dared to spend the night in a “haunted house”, would you do it?

No, I’d probably psych myself out about it.  That said, I have spent the night in a few hotels that are supposed to be haunted (though I have no ghost stories to report).

Yes, but more in the idiosyncratic sort of way.  Maintaining certain rituals during sports games, not mentioning certain things or events I want to happen, things of that nature.

8. Do you ever see figures in your peripheral vision?

Nothing more menacing than the usual tricks of the eye.  I also wear glasses, so that may have an impact as well.

9. Which urban legend scares you the most?

I couldn’t really think of any horror-based urban legends, so I got real with this one and decided upon the conservative myth of systemic voter fraud (on behalf of their opponents only, of course). Truly terrifying that this is a “mainstream” view these days.  That’s my rant for the week,

10. Do you prefer gore or thrillers?

Thrillers.  I’m generally not a fan of gore and that is probably the number one reason I never got into the horror genre.

11. Do you believe in multiple dimensions or worlds?

Yes.  I don’t necessarily think that we can interact with them without extraordinary cosmic upheaval or technology WAY beyond or current capabilities, but I do believe they exist.

Sure, if you count mixed drinks.

Yeah, probably.  I’m not necessarily proud to admit this but that’s my honest answer.

14. Have you ever played Bloody Mary?

Nope.  Seemed pointless to me as a kid and I’m not about to start doing it as an adult.

15. Do you believe in demons/the devil?

No, though I suppose I could also be called somewhat agnostic on the issue.  I’m not exactly sold on the idea of their counterparts either, at least in any mainstream sort of way.

16. You’re home alone but you hear footsteps in your house, what do you do?

Assume it’s from next door or outside most likely.  I’d probably be more weirded out in a strange setting, like an Airbnb though.

17. If you got trapped in one scary movie, which would you choose?

This doesn’t really sound like my idea of a good time, but I wouldn’t mind hanging out with Bill Murray in Zombieland I guess.

18. If you could only wear one Halloween costume for the rest of your life, what would you be?

My Flava-Flav inspired steampunk suit.  Basically I wear black dress pants and shirt, a knee-length men’s black dress jacket, a top-hat with gears on it, big silver goggles, and a bronze wind-up clock around my neck on a thick chain.  Usually a cane completes the ensemble.

19. Would you ever go to a graveyard at night?

Absolutely.  There are some very nice cemeteries in my area and I find evening strolls in them very relaxing.

20. In a zombie apocalypse what is your weapon of choice?

Practical answer is probably a machete since it doesn’t rely on expendable ammunition and can serve other uses.  My purely fictional, and likely impractical, answer is shotgun with a pitchfork bayonet. 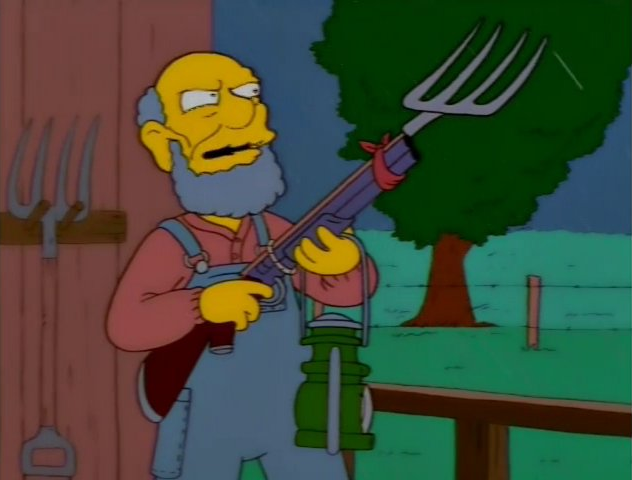 21. Would you rather go to a Halloween party or go trick or treating?

My likely answer is party, but that might change after taking my son out for his first trick-or-treat this year (at least until he gets too old to want his parents around).

22. You’re in a horror movie. Are you the final girl, the first to die, the comic relief, the skeptic, the smart one, or the killer?

Well, for starters I’m a guy but in keeping with the spirit of the question I’d probably be the skeptic.  I give myself even odds of living.

23. Do you have to watch something happy after watching a horror movie so you can go to sleep?

Not necessarily, but a little decompressing by doing something mindless isn’t out of the question.

24. Whilst watching scary movies, are you the type who yells at the characters, the person with their eyes covered the whole time, or the person who falls asleep?

Who says I can’t be all of the above?

It’s a pretty even mix in my house.  I’ve gotten my wife pretty good over the years, but she never fails to return the favor.  Our two-year old seems to be trying to get in on the action, a prospect that is both adorable and concerning.

Uh-oh.  Um, I don’t really read scary books!  I’ve already mentioned Hyperion in this post which has some scary/horror elements to it, but I don’t know if it quite fits what this prompt was going for.  I also enjoyed the Lovecraft collection I read earlier this month, though I can’t really say that it scared me.

27. How old were you when you saw your first horror movie?

Grade school probably.  I recall for sure seeing Ernest Scared Stupid in the theater at roughly 9 years old so I’ll go with that.  Truly a horror classic.

28. What was your first Halloween costume?

I don’t know for sure, but the first one I remember is a light blue felt stegosaurus suit.  I loved that thing!

29. What are you going to be for Halloween this year?

My official costume is Vampire.  My son has been really excited for over a month about being a vampire for Halloween, so that is what the whole family is doing.  How/if he knew what a vampire was at the time he asked for this is a mystery.

My unofficial costume that I’ll wear to work or more minor Halloween outings is MegaMan from the series of NES games.  It’s nothing crazy, just a hoodie designed to look like him and a stuffy of his robot dog, Rush, pinned to my shoulder.

30. If you could have a spooky Halloween pet (black cat, owl, bat, rat, wolf), what would you pick?

Black cat all the way!  I actually had one as a teenager named Edgar (after Edgar Allen Poe) and we had a special bond, probably due to our mutual love of food and extreme introversion.  I’d love to have a cat now as an adult, but my wife and I are now both terribly allergic.