One of my greatest discoveries while blogging here has been the Central Waters Brewers Reserve Series.  So far I have tried and reviewed four beers from this series and each of them left me impressed. Could this one continue the trend? 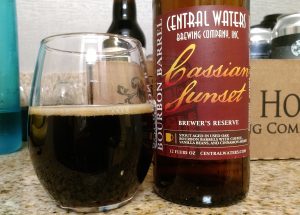 Smell: An incredible mix of creamy sweetness and chocolate fudge, capped off by a moderate bourbon finish.

Taste: Deliciously close to the smell.  It opened with creamy, rich dark malts followed by a big chocolately/fudge presence with hints of cinnamon and vanilla mixed in for good measure.  A moderate and smooth bourbon barrel finish brought the beer to a pleasantly warm finish.  Seemed like the longer this sat in the glass, the better it kept on getting.

Hype: I certainly had high hopes going in, but I can’t really say how the beer community at large feels about this.  I have seen plenty of online enthusiasm for this series though.

Overall: This one wowed me.  Huge creamy dark malts and sweet chocolate notes kept the cinnamon and vanilla in their ideal roles as supporting flavors while the finish nicely showcased the barrel aging process.  A four pack of these bottles in the $15-16 range is an easy buy and one I intend to repeat. If big dessert-like stouts are your thing, you need to try this.