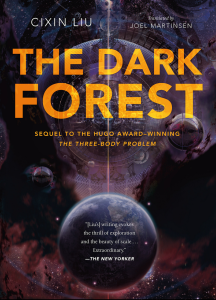 Getting back into the reading side of things, the next series that I want to finish off this year is Liu Cixin’s Remembrance of Earth’s Past trilogy.  Published in 2008 (and translated to English in 2015), The Dark Forest is the sequel to Three Body Problem, an immensely popular Chinese hard science fiction novel that also just so happened to be runner up for my favorite sci-fi novel of last year.

The story begins about three years after the events that ended the previous the previous book.  Now aware that there are only 400 short years left before they are confronted by an invasion fleet from Trisolaris, the nations of Earth have begun coming together to dream of ways that humanity might survive the encounter.  There are no easy answers, however, as the Trisolarians possess vastly superior technology and already have some rather formidable advance forces in place on Earth. Desperate to develop any sort of defense, the United Nations and newly formed Planetary Defense Council nominate four prominent individuals, called Wallfacers, to secretly develop strategies for survival.  Granted unprecedented authority and resources, they are given nearly free reign to direct their projects. Though each is controversial in their own way, it is the shocking selection of a “cynical and irresponsible” astronomer/sociologist named Luo Ji that may ultimately make the greatest impact.

Like its predecessor, I found this book absolutely fascinating to read.  It takes its name from one particularly bleak interpretation of the Fermi Paradox and again leaves the reader with plenty to think about in regard to life, the universe, and, well, science.  The story moved along at a steady pace, switching between a variety of characters and locations as the story progressed. Particularly notable moments for me were seeing the Wallfacers confronted with the truth of their plans (which felt oddly reminiscent of a Bond villain’s reveal in reverse) and the palpable tension leading to humanity’s first encounter with a Trisolaran probe.  This latter event was probably my highlight of the book and even though it turned out more or less how I thought it would, I found this section riveting all the same. I’ll admit there were a couple of other plot points about which I had to try not to think too hard about, but on the whole the entire story was incredibly engaging.

I also found the scientific aspects of the story quite intriguing as well.  The first two thirds of the book focused on near-future tech and cutting-edge theory, presenting a very thought-provoking mix of ideas.  The ones I found most interesting were the space elevator and alternatives to consumable fuel about which I of course did some additional (non-required) reading.  The final third of the book, which thanks to the wonders of cryo-preservation, takes our main characters 200 years into the future, was equally intriguing. I don’t want to say too much, but here I found developments like nearly limitless, renewable power and having everything around you connected to a network fascinating concepts, though also a bit terrifying in the case of the latter idea.  Surely though, it will be the major advances in spaceflight that have the biggest impact going forward.

And finally, some thoughts on the characters.  The book had a deep, well developed cast that succeeded in putting a human face on all the ideas and theory discussed above.  Luo Ji, was easily my favorite of the main characters. Something about seeing such a brilliant yet disinterested person granted so much authority really entertained me, and it was most certainly noteworthy that he was also the only Wallfacer who actually succeeded at creating a (relatively) low-cost, viable plan that he was able to keep hidden across centuries.  I loved seeing him paired with bodyguard/kindred spirit Shi Qiang, another favorite of main and the only character from the previous novel to return in a regular role.  The dynamic between the two was incredibly entertaining and really brought a solid human element to the story. As for the other lead, Zhang Beihai, a political officer in the PLA Navy and eventual Space Force, he was in contrast a much more serious and determined individual, though he certainly had plenty of surprises in store for the reader as well.  I definitely found him much more interesting as the story went on.

I am now very eager to jump into book three and find out where this journey is taking us.  Since this installment actually ended on a somewhat positive note, I am really curious what the final chapter has in store for the beings of Earth and Trisolaris.  With a few big plot points potentially left on the table, namely the existence of other “hunters” and the rather ambiguous resolution to one of the other Wallfacer’s plans, I’m sure there is plenty of great story yet to come.

2 thoughts on “Book Review: The Dark Forest, by Liu Cixin (Book Two in the Remembrance of Earth’s Past Trilogy)”