My wife and I took advantage of my mom’s offer to babysit last Saturday and went out for our first proper “date night” in quite some time.  Our destination of choice was lovely Newbury, MA for the 8th Annual Christmas Tree Burn Fundraiser.  Braving temperatures dropping below 20°F, we had an excellent time walking the farm, watching an ice sculptor, and, of course, taking in the giant bonfire that sent all the Christmas trees thrown away this year out in a blaze of glory.

Another point of interest, particularly for me, was a beer called Defrost, a special release local favorite Ipswich Ale Brewery prepared specifically for the event. 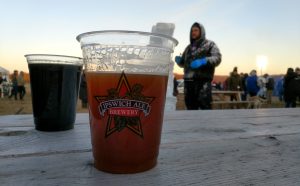 Description: Brewed for the event and to help fight the winter blues, the release notes promise a beer that balances “iconic German yeast flavors… against a complex malt base with notes of chocolate and dark fruit.”  Proceeds of its sale go to benefit the Newbury Volunteer Fire Department.

Appearance: Fresh off the draft lines of one of the brewery’s handy little tap mobiles, it poured an opaque caramel colored body with some light tan lacing spread out across the top.

Taste: Sweet bready malts upfront, followed by notes of dark fruit, wheat, and banana-like esters in the middle.  A very subtle noble hop presence brought it all together with just the barest hint of spicy bitterness.

Mouthfeel: Medium bodied with a slightly above moderate carbonation level.

Hype: Relative to the beer scene in general I would say not much, but I was certainly interested in trying this out and the lines for beer suggested that I was not alone in this.

Overall: A very flavorful brew that certainly did its part keeping me warm on a rather chilly evening.  I had a couple of these that night and might even have a few more if it crosses my path again.