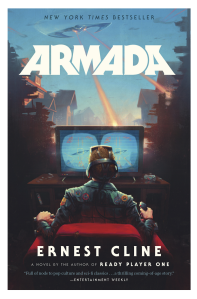 Back into science fiction we go!  Published in 2015, this is the second novel from author Ernest Cline and the follow-up to his highly successful Ready Player One (the movie adaptation of which hits theaters at the end of March).

Zack Lightman is a seventeen year-old gamer living in a small town in Oregon.  One day while drifting off in class, he looks out the window and sees a spaceship from Armada, his favorite online game, hovering in the sky.  He soon comes to discover that the game is actually a secret government training program and that it, in conjunction with nearly every major American science fiction work of the last 40 years, has been designed to prepare humanity for eventual contact with hostile alien forces.  As one of Armada’s top players, Zack is recruited to an elite force that will lead the fight against the coming alien invasion.

Honestly, I have to say that I was incredibly disappointed by this book.  In theory this was something I should have loved, especially considering how much I liked Cline’s previous novel, but sadly that was not the case.  Sure my brain fired off all the requisite happy little tics associated with catching references to our shared fandoms, but stylistically this book leaned far too heavily on its myriad of geek cultural references and appeals to nostalgia for its own good.  I love references to things like Dune and Star Wars as much as the next guy (perhaps even more so since I noticed the author mistakenly referred to A-Wings being present at the Battle of Yavin), but this story lacked any substance beyond such references.  It too often read like a literal listing of the author’s favorite things and about halfway through started getting cringe-worthy. Plot-wise the story didn’t offer anything new or exciting beyond being a mashup of Ender’s Game and The Last Starfighter and even that felt lessened by Zack giddily considering these possibilities at length.  As for the characters, they were all essentially the same person (or even Ready Player One characters for that matter), all sharing a near-obsessive interest in the exact same movies, games, books, TV shows, and music as each other despite significant differences in nationality, age, and gender.  This in particular felt like a missed opportunity as I think it would have been fun to look at how a diverse set of fandoms would intersect in this world. Alas, that was not to be.

Alright, I’ve said my piece and will stop beating up on this now, though I will say that something about letting all that out felt cathartic.  I think what bothered me the most after this reading was the feeling that this was more an uninspired, or even worse cynical, effort to sell me my own nostalgia rather than an attempt to offer entertainment. It just felt way too similar to the author’s previous book and not nearly as well executed.  Suffice to say this one was not for me and I would not recommend it, even to folks like myself who fit squarely within its target demographic.