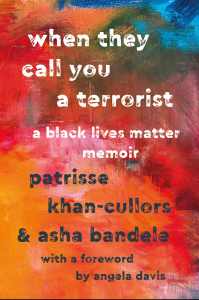 In recognition of Black History Month I wanted to make sure that I did some reading to properly observe the occasion.  With one eye set towards the future, this next book tells the story of someone currently in the process of making history.

Published in 2018, this intimate memoir looks at the life and a activism of Patrisse Khan-Cullors, a woman praised in the introduction for her work towards pushing the boundaries of black, left, feminist, and queer activism.  In these pages she describes the hardships of growing up poor, black, and queer in Van Nuys, CA during the 1990s. Often deeply personal, she provides an account of how growing up in these conditions shaped the lives of her and her family and motivated her to pursue work as an activist and community organizer.  In the final chapters, she brings it all together to tell the story of how the acquittal of Trayvon Martin’s killer in the summer of 2013 set off a chain of events that led her to co-found the Black Lives Matter movement alongside colleagues Alicia Garza and Opal Tometi.

This was an intense read.  The conversational tone of the book combined with its emotional mix of sincerity, pain, frustration, anger, love, and faith made it a powerful experience.  It speaks much to the author’s strength as a person that she could share such a personal story, particularly in regard to her father’s struggles with addiction and her mentally ill brother’s mistreatment and literal torture by the Los Angeles County Sheriff’s Department as real life examples of the issues she discusses.  I couldn’t possibly hope to sufficiently cover all the details here, but alongside her personal story she offers a pretty spot-on analysis of the ways in which race and class can stack the deck against people living in poor, predominantly black communities like the one she grew up in. She talks a great deal about how a lack of proper public amenities and infrastructure, social services, and economic opportunities work in combination with a disproportionately intense, and often unaccountable, police presence puts people on track for failure, prison, or violence at an early age by “normaliz[ing] expectations of criminality” and creating a stigma around these individuals and communities that can last a lifetime.  She ties to this an analysis of the prison system and how the “prison industrial complex” benefits from the high levels of incarceration resulting from the dynamic above.  Prisoners, she observes, are a valuable source of cheap labor for the state and corporations alike while the jails themselves offer lucrative contracts to the people who operate and stock them while simultaneously providing employment opportunities to replace lost rural jobs in poor white communities.

As for myself, I was left with a lot to think about after reading this.  In short, this book made me angry; angry to live in a society where the sort of systemic oppression the author describes not only exists, but is considered right and just by a significant enough portion of the population that questioning it can be spun as a controversial or radical idea.  Many times throughout this story I found myself thinking back on events from my own life and how they might have played out differently had my circumstances and socio-economic status not been what they were. I won’t go into details, but I can readily think back on several events (some innocent, others less so) from my teen years spent living an affluent, mostly white town where the type of police scrutiny and automatic assumption of guilt could have easily altered the course of my life for the worse and that is a sobering thought indeed.

In closing, I want to say that I found this a powerful and educational read that I would recommend to anyone interested in these issues.  Although I didn’t really get into this part of the book above, I also came away from this read with a much deeper appreciation of what Black Lives Matter seeks to accomplish and learned a lot about how influential feminist and queer activists play in the movement.  There is without a certainly a lot more to those stories than what most people hear in the news, and in this book Patrisse offers an important voice that needs to be both heard and taken seriously.