I know I’m well past fashionably late in posting about this popular 2018 release, but after months and months of seeing a steady stream of glowing reviews how could I stay away?  Combine that with my general interest in Greek mythology and I felt very confident I had a winner here.

This book tells the story of the nymph Circe, in her own words and from her own point of view.  Daughter of the Titan Helios and the ocean nymph Perse, she is perhaps best known as the sorceress in Homer’s Odessey who transformed several of Odysseus’ men into pigs before eventually playing host to the travellers.  Her mythological presence, however, goes far beyond this appearance, crossing paths with other famed notables such as Daedalus, Jason and Madea, and the Minotaur, just to name a few.  Over the course of this story, the reader is treated to the tragic story of Circe’s life and her unique view of many popular mythological figures and events.

I was absolutely blown away by this book.  The mythology was as interesting as ever (although I would definitely recommend some familiarity with the source material going into this read), but it was Circe’s unique perspective and modern tone of voice that really made this story into something truly special.  By showing a side of the ancient myths that looks beyond the exploits and struggles of their often idealized male protagonists, this novel brought them to life in an entirely new way for me. Although there are many familiar people and places that appear in this tale, this is without a doubt Circe’s story and it focuses on the life of a woman wronged and her determination to carry on as best she can, despite what others may do to her or spread gossip about.  As Circe opines of Homer specifically other ancient poets in general:

Humbling women seems to me a chief past time of poets.  As if there can be no story unless we crawl and weep.

Circe, however, is definitely not one to be humble, no matter what comes her way.  I knew enough about the myths to not expect easy times for her, but that didn’t quite prepare me for how heavy and occasionally depressing this book got in places (indeed, I found the scenes in which she expounds upon her parenting fears particularly moving).  Deeply personal, the story details how she was shaped by the emotional abuse she was subjected to in her father’s court by her mother and siblings on account of her less than Olympian presence and her feelings of isolation following her exile to the island of Aeaea for practicing magic.  As such, there was a lot of raw emotion fueling this story, alternating between Circe’s profound loneliness to her unshakeable determination to exist on her own terms.  Armed with the knowledge that nymphs like her are dismissed as a punchline by the other gods – “an endless feast laid out upon a table, beautiful and renewing.  And so very bad at getting away” – and a strength of character she learned from a chance encounter with Prometheus, she gradually comes to master her skills and find occasional happiness even as events of the mythological world more and more begin forcing themselves upon both her island and herself.  It’s a journey that I found both profoundly sad and empowering, as well as one that I could not turn away from.

Despite all that heavy content, I thoroughly enjoyed this book and give it my highest recommendation.  It more than lived up to all the praise I’ve seen for it, no small feat at this point, and offered a gripping story with an incredible leading lady.  I’ve seen that the author has also written some other books inspired by Greek mythology and I am definitely going to be adding those to my reading pile.  I think I just need a little bit of time to read some lighter fare before jumping in.

It’s been awhile since I last took on a book tag and this was definitely one of the more intriguing options I had lying around in my notes.  I like to think that I am fairly inclusive and open-minded in my readings, so, to the extent possible, I am limiting my selections to books I’ve reviewed here.

I had to think about this one for a bit, but I eventually decided that I am going with Colleen McCollough on this one.  I absolutely love her Masters of Rome series and consider it the absolute standard against which I will forever judge all works of historical fiction.  I know she has written other things that are bit different from these books (and with which I am entirely unfamiliar), but it was hard to pick against her after so thoroughly enjoying seven books and nearly 6,500 pages of her work.

Ugh, another favorite question!  I’m calling this one a toss-up because I couldn’t decide.  It’s either Darwi Odrade from Heretics of Dune and Chapterhouse: Dune or Vin from the first era Mistborn trilogy.

A novel with a feminist message 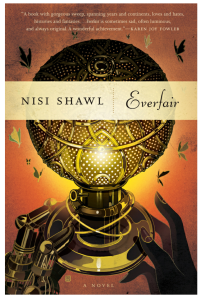 After spending a pretty good amount of time thinking about this what would make a novel feminist, I decided upon Everfair, by Nisi Shawl.  I did so because it features two prominent female characters who challenge conventions with their political activism, academic/scientific interests, and sexuality.  A quick read of the author’s bio reveals that these are all topics near and dear to her own heart, as her academic and literary focus is on Sci-Fi and Fantasy works that look at, among other things, issues of race, gender, sexual orientation, and socio-economic status.

A novel with a girl on the cover 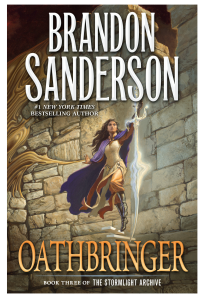 Not sure that cover art is necessarily a sign of feminism, but Brandon Sanderson’s Oathbringer, one of my favorite books from this year, has a rather striking depiction of Jasnah Kholin on the cover.

A novel featuring a group of girls

While I certainly wouldn’t call them “girls,” I’ll pick the all-woman cast of The Stars are Legion, by Kameron Hurley – a female author who strongly identifies as a feminist.  Digging a bit deeper here, I read an interesting review after finishing this book that touched upon the issue of gender in this universe where men simply do not exist even as a concept (at least in the scope of the story thus far).

A novel with a LGBTQIAP+ female character

It just so happens that I’ve read two books so far this year starring main characters that fall within this category.  The first was Barbary Station, by R.E. Stearns, in which engineer/programmer Adda Karpe and her girlfriend Iridian try to join a band of space pirates.  The second book was the aforementioned Everfair, in which a young biracial French woman named Lisette enters into a polyamorous relationship with an Englishman only to find a more lasting love with his (former) wife Daisy.

A novel with different feminine POV

Different is a bit ambiguous here, but easily the most atypical female POV I can readily recall is Purga from Stephen Baxter’s Evolution.  She is a small mammal living roughly 65 million years ago in the late Jurassic era.

A book where a girl saves the world

I’ll go with Soon I Will be Invincible, by Austin Grossman for this one though I won’t spoil which of the novel’s superheroines ultimately saves the day.

All the books in the The Expanse series featuring Bobbie Draper.  It’s no contest between her and James Holden, or any of the other Rocinante crew members for that matter.  Needless to say, certain events that happen early on in Persepolis Rising made me very happy.

I’m going to assume this meant to say female main character.  Um, lots? Sarene from Brandon Sanderson’s Elantris is one of my favorite new (to me) characters of the year thus far and she would probably embrace being called a feminist to boot.