This may seem like quite the statement after my previous post, but I have truly saved my best Texas beer experience for last.  Feeling a bit adventurous, I took a 20 minute Uber ride out to downtown Garland, TX to check out Intrinsic Smokehouse and Brewery.  I found this place through the magic of the internet, but one of my coworkers the next day expressed their love for the place as well. 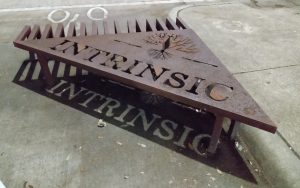 This place was so amazing, I’m not even sure where to start!  Walking in the front door immediately enters you into brewing heaven.  There were some assorted knickknacks off to the left followed quickly by a stack of barrels, a cooler full of beer to go, and finally the bar counter.  Beyond that lay a bunch of wooden tables and benches before ultimately arriving at the BBQ serving counter in the very back. The old brick walls allowed the place to maintain it’s old warehouse feel and the colorful, funky art adorning them added a bit of fun.  It seemed like there was something cool in every corner of this place and if it was a bit less crowded I would have loved to wander around taking it all.  Unbeknownst to me until my final beer, the double doors across from the bar lead to an indoor patio of sorts. It had the same warehouse vibe (though a bit less finished) and featured large windows upfront.

My first order of business upon arriving was procuring food so my first destination was to the BBQ counter in the back.  Everything looked great, but I finally decided upon a two meat combo featuring pulled pork and brisket along with slow cooked greens (with bacon!) and coleslaw.  It was all delicious, but the stars of the plate where the brisket and the greens. The flavorful, crispy edges and tender insides were exactly what I was looking for and the bit of spice on the greens was complimented perfectly the presence of bacon.

And now, finally, we arrive at the beer.  My first brew of the evening, Texas Shake (shown below with dinner), was probably my favorite of the trip.  A 6.7% “Milkshake” IPA brewed with lactose and local peaches.  It had a glowing, pale yellow body and an insane nose full of apricot and peach aromas.  The taste matched the smell, and the added lactose gave this a creamy smooth fruitiness that had this living up to the “shake” name more than any other beer if this style I have tried thus far.  This was the beer of the trip for me and I have no regrets about having two of these! 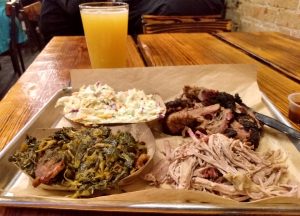 Beer number two was their 7.8% Barrel Aged Donut Milk Stout.  Aged in bourbon barrels, it poured to deep, dark brown/black body and smelled of dark malts and barrel notes.  The taste was equally impressive, with sweetness upfront reminiscent of molasses and chocolate sitting atop a doughy malt base.  It finished with a very well developed barrel presence and some sweet heat. The thick mouthfeel held the flavors perfectly, making this another fantastic brew!

My final unique beer of the evening was a 9.3% DIPA named Chubby Unicorn.  It poured to a surprisingly non-hazy yellowish/gold body and had a big, fruity nose that almost rivaled that of Texas Shake.  This brew, however, while starting out sweet with a citrusy/tropical blend, it also had a moderate biscuity malt backbone and some slight toasty notes before ending with a piney/earthy bitterness.  I liked this one, but for me it lacked the “wow” factor of the previous beers.

And that’s about where I wrapped up my evening.  This place without any doubt or reservation gets my absolute highest recommendations.  If you’re in the area (even remotely) find a way to get yourself in here. Between the food, the beer, and the atmosphere I promise you won’t be disappointed!  For some bonus content, I’ll throw in a couple more of my favorite pictures from this visit below: