In case you weren’t aware, June is Pride Month!  To help kick the festivities off in style, Everett’s Bone Up Brewing Company unveiled a new beer and merch this past weekend to help raise money for the folks at GLAD (GLBTQ Legal Advocates & Defenders). 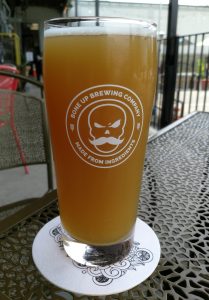 Appearance: Juice-like, orange and gold body with a thin layer of white foam across the top.

Taste: It had a smooth light orange, melon, and citrus rind sweetness that sat atop a subtle base of pale/biscuity malt.  There was a mild bitterness on the end with a touch more sweetness.

Hype: As a testament to their belief in this cause, the brewery definitely made sure their social media followers knew this hitting the taps.  I don’t know about any additional hype necessarily, but people did seem pretty enthusiastic about this.

Overall: Fresh, easy drinking, and very refreshing.  It had a nice sweetness and mouthfeel that made it the perfect beer to sit outside with on a warm day.  Happy Pride you all!

I happen to live in an area that sees some pretty good beer distribution, with new things coming in fairly regularly these days.  One of the latest brands to arrive here is Toppling Goliath, a popular brewery based out of Decorah, Iowa. Their wares first hit the shelves here with a decent amount of fanfare a few months ago so I waited a little bit before trying to pick any to avoid the rush. 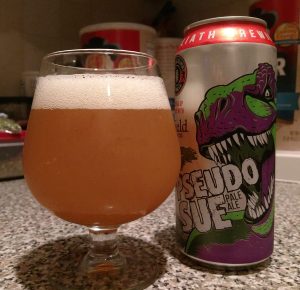 Description: A pale ale hopped exclusively with Citra.  Said to feature ferocious hop aromas and a well-balanced body.  It draws its name from Sue, a T-Rex fossil that resides at the Field Museum in Chicago, IL.  Apparently this was the source of some tension at first, bit happily the two sides were able to come together.

Smell:  Mostly tropical fruits to start, followed by a sweet grapefruit and pine bitterness on end.

Taste: Citrus and mango upfront followed by grapefruit and pine bitterness atop a bready/crackery pale malt base.  Smooth and balanced progression of flavors.

Mouthfeel: Fluffy medium body with a moderate amount of carbonation.

Hype: Elevated.  There was a lot of demand for this beer when it first hit the shelves, understandably so it has very high reviews on the popular beer rating sites.

Overall: Very tasty, but from my perspective I think a lot of the excitement about this came from it being new to the market.  I definitely understand why the beer has earned such a solid reputation, but with so many other excellent examples of this style already available in my area, I don’t really feel like I’ve missed out by not having had this before.