With the penultimate episode now in behind us, it seems like a good time to lighten things up a bit (no pun intended).  I actually came across this next beer by complete chance while out with the family for Mother’s Day dinner.

Appearance: It arrived with a murky, red/dark grapefruit colored body with a thin line of white foam across the top.

Smell: Lightly tart with a very subtle funk on the end.

Taste: Very sweet with a tart berry background.  The berries definitely came through loud and clear and this one, with plenty of raspberry, strawberry, and blackberry on display.  There was a bit of cream and light funk in the background.

Mouthfeel: The body was a bit thicker than I thought it would be with a light bump of carbonation on the finish.

Hype: I had no idea this beer even existed until I saw the beer list.  Once I saw the the name I had to order it.

Overall: It good, though not something I was particularly excited by.  I’m not really into this style all that much anymore so I’m sure that plays a role here as well.  Light tasting with a huge berry presence, this would be very well suited to a sweltering hot day or on ice at the beach.

After a fun-filled afternoon at the Providence Children’s Museum last Sunday, the family was looking for somewhere to eat before starting our journey home.  Since I had randomly found out about the nearby Trinity Brewhouse a few days earlier, and subsequently confirmed they had a kid’s menu, it seemed like a sign that we had to check it out! 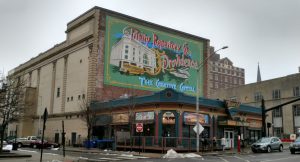 I had a feeling this place was going to be fun before we even got inside.  My picture doesn’t really do it justice, but the outside of the building is lined with catchy signs advertising their wares and letting passersby know exactly where they can hope to find some good beer.  Inside, a variety of decorations, signs, and murals added plenty of character to the otherwise dark, pub-like atmosphere. I won’t go too much into the food, but my wife and I both really enjoyed our meals and found them far superior to your stereotypical pub fare.  Both her bison-burger topped with goat cheese and my cheeseburger featuring onions and chorizo sausage were amazing. Not to leave anyone out, our toddler devoured his hot dog and fries, so I guess we can consider that dish a success as well. He was also quite amused by a T-Rex head mounted on the wall so I guess you could say they really did have something for everyone!

Now that I’ve set the scene, let’s bring out the beer!  There were eight house beers on tap that day so we ordered two six-pour flights in order sample them all and get a feel for the place.  My wife recently starting drinking beer again, so this time around I had both help with all this beer and someone I could compare my notes with.  Let’s run down that list. 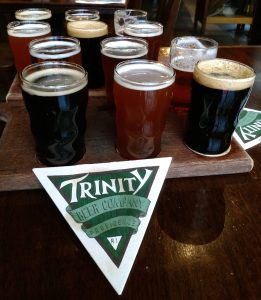 Starting at the top, we both found the 5.5% Kolsch to be one of the standouts.  It had a smooth, clean sweetness and light body that paired very well with our hearty meals.  Something about finding a good example of such a classic style really made me happy. Next on the list was Tommy’s Red, a 5.9% amber ale that neither of us had any strong feelings about.  It was a perfectly fine example of a style that perhaps isn’t the most glamorous, but it also didn’t give us the simple joy that the Kolsch did.  Moving on we came to the RI IPA, a 7.9% English-style IPA that combined dry citrus notes and a mild piney bitterness with a solid malt backbone.  I enjoyed this one, but my wife wasn’t quite as impressed. Our opinions then flipped for Darkness, a 8% Russian Imperial Stout.  My wife really enjoyed the robust roasted malt and chocolate profile whereas I thought it was a bit too roasty for my taste and would have liked it to have been slightly thicker.

Leading us into the bottom half of the list was Screaming Viking, a 5.6% wheat beer brewed with honey, ginger, and cardamom.  There was a nice wheaty sweetness on the bottom of this, but ginger was by far the most prominent flavor.  I’d say we both appreciated the novelty of a sample, but don’t think either of us needed much more than that.  Up next was the Cousin Brother, a 5% brown ale that wound up being my wife’s favorite as she really enjoyed the light toasted malt profile and called it “the kind of beer you could drink all day.”  Not being a fan of brown ales I don’t know that I quite agree with that statement but I can say that this was a very good example of the style for those that are into them.  Second to last on the list was the 5.6% Belgian Gold which we both really enjoyed.  Mild and smooth, it had a nice fruity Belgian yeast presence right from the start with a subtle peppery/spicy/floral finish.  This one was probably my favorite. Closing things out was the biggest beer of the day, the 11% Belgian Quad.  It drew a hard pass from my wife as it started out with a harsh alcohol presence she found off-putting but I gradually made peace with this one.  It eventually settled somewhat into the more familiar realm of caramel malts and bubblegum yeast, but did maintain a hot edge to throughout.

And there you have it.  Everyone found something they liked and we all left full and happy.  With the consensus opinion being that the beer was good and the food was great, we will definitely be stopping in here again on future trips.

With warmer weather almost upon us, I wanted to make sure I got another stout under my belt while it’s still technically winter.  I happened upon this particular brew while picking up beer for my I Am Providence review and couldn’t resist getting a six-pack of this as well. 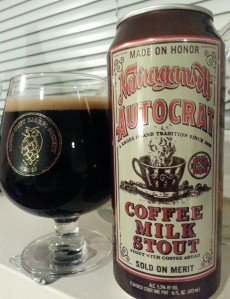 Description: This beer was the result of a collaboration between Narragansett and another long-lived Providence, RI company: Autocrat Coffee.  You can get the details here.  The six-pack of 16 oz. tall boy cans came at the very nice price of $8.50.

Pour Info: Refrigerated 16 oz. can into my new snifter glass.

Appearance: As expected of the style, this poured a deep, dark brown body with a thin tan head that mostly fizzed away.

Smell: Light coffee smell as soon as the can was opened.

Taste: It had a light yet steady coffee taste throughout that peaked towards the end.  On the finish, the beer picked up a  sweet creamy taste that blended into a hint of even more roasted coffee.  Subtle yet flavorful.

Mouthfeel: Smooth and creamy like you would expect for the style, but it felt a bit thinner than I was anticipating.  Carbonation level was low.

Hype Factor: Not much I suppose, but this beer did made a good impression on me the first time I had it about a year ago.  It gets bonus points because that first time was during an impromptu visit to my old college drinking spot – the Blarney Stone in Worcester, MA.

Overall:  A good beer and another one that was quite satisfying despite not having over the top flavors.  I was happy with this pickup, especially since it came at such a reasonable price.  Fans of the style should do themselves a favor and check this out.

I’m finally back, this time checking in with a very cool offering from Narragansett Brewing Company.  Founded in 1890 this Providence, RI based brewery recently started a line of beers inspired by another Providence native born in 1890: horror writer H.P. Lovecraft.  While I missed out on the earlier entries in the series, this one got my attention.  Not only did it come out right around the time I was getting into a Lovecraft inspired text-based game, but the beer was an imperial red ale.  The combination was too good to pass up.

Beer Name: I Am Providence

Description: The third installment in Narragansett’s line of beers taking inspiration from the works of H.P. Lovecraft.  For this offering they brewed a hoppy red ale, the specifications of which you can find here.  It was around $12 for a six-pack of 16 oz. tall boy cans.

Pour Info: For the purposes of this review, I drank two of these: one poured into a snifter glass and the other straight from the can.

Appearance: The beer had an amber body with a reddish gleam to it when held up to the light.  A fizzy white head formed quickly on the pour and then steadily fizzed away.

Smell: There wasn’t much to report in regard to the smell.  Just a faint cotton-candy like sweetness that was a bit stronger coming from the can than the glass.

Taste: Consumed from the glass, the beer had a sticky caramel malt sweetness upfront coupled with citrusy hops.  It then transitioned to a more bitter and piney taste before coming to a resinous finish.  Mixed in was a wheaty/yeasty character that seemed somewhat out of place, along with hints of alcohol.  From the can, this beer was a bit more cohesive.  The taste followed the same general pattern as it did in the glass, but the bitterness on the end wasn’t quite as pronounced and blended into the sweetness a bit more.  The heat from the alcohol and yeasty/wheaty presence were still there, but much less discernible, making for a smoother drinking experience.  I preferred it from the can.

Mouthfeel: Sticky medium body with a moderate amount of carbonation.  Nice and easy to drink, especially from the can where it picked up an almost creamy smoothness underneath the bubbles.

Hype Factor: I suppose a release from Narragansett Brewing isn’t something most beer enthusiasts typically get super excited about, but as I said in the introduction, I had my reasons for wanting to try this.

Overall:  A pretty good beer, no more and no less.  While it might not have been the hoppiest or maltiest of brews, it did strike a nice balance between the two that worked in its favor.  Working against it were its tendency to get a bit too boozy for the style and the occasional feeling like everything didn’t quite came together as well as it could have.  That said though, I’ll have no problems finishing my remaining cans and was happy I picked it up.