After a two year hiatus, I was finally able to make my way back to the annual New England Real Ale eXhibition (NERAX) festival in South Boston.  Scheduled to feature over 100 different cask ales and ciders from a wide variety of US and UK breweries, this is a can’t miss event for aficionados of the format and any beer drinkers interested in trying something a bit different.  It opened last night and has sessions running through Saturday, April 6 so definitely consider checking this out if you’re in the area. You can pre-order tickets here on the event website at a nice discount from the price at the door.

I am a huge fan of this event and find it a lot more approachable than any other beer festival that I have been to.  The pay as you go format and ability to order quarter, half, or full pints effectively put less emphasis on rapid consumption and chasing sample pours and more on actually tasting and appreciating the beer in your hand.  It also makes for a much more laid back and relaxed atmosphere than your typical fest and I found myself really appreciating the difference. As an added bonus, the catering is provided by the long time NERAX supporters Redbones BBQ in Somerville, MA! 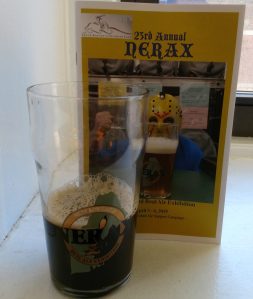 The beer, of course, is pretty exceptional as well.  While the available offerings can, and often do, change throughout the course of a session, there is never a shortage of beer to be had and the selection is like none other.  With offerings from local favorites across the New England region and stuff from overseas you won’t find anywhere else in the area there are plenty of intriguing options to explore in a wide range of styles.  Everything from light Pilsners and ESBs to big Double IPAs and Imperial Stouts are on the list so one can go as heavy or as light as they want and still have plenty of options. As for myself, I focused a little bit more towards the UK breweries to take advantage of the opportunity and paced myself by making sure I tried out some of the more sessionable brews despite all the heavy hitters that kept catching my eye.  Upon entry you are handed a booklet with short notes about every beer being poured, so don’t be afraid to take a step back and look up beers you don’t know about. More often than not, being adventurous is rewarded here! With that in mind, my winners of the evening from each side of the pond were: 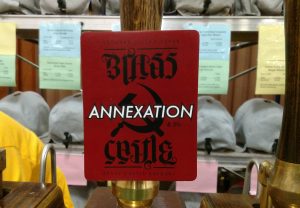 From the US: Beer’d Brewing Company (Stonington, CT) – Dogs & Boats: A 9.1% Double IPA hopped with Citra and Mosaic with an addition of pomegranate juice to the cask.  It started out with a subtle, mildly bitter juicy sweetness before the pomegranate addition brought on a slightly sour, smooth haze over the beer.  It finished dry with just a hint of hops and tasted every bit as good as it smelled.

From the UK: Brass Castle Brewery (North Yorkshire, England) – Annexation: An 8.3%, gluten-free Russian Imperial Stout the brewers call “as smooth as the Volga and as bonkers as Putin.”  This was crazy smooth for the style and was amazing on cask. A little bit sweet, a little bit creamy, a little bit boozy it also had some great chocolate and molasses tastes going on that I would love to get some more of.  The fact that it also happens to be gluten-free is simply mind-blowing. This was a superlative brew in its own right, but for a GF beer it is completely unequaled in my experience.

Honorable Mention: Fyne Ales (Cairndow, Scotland) – Highlander: A super drinkable 4.8% Amber Ale that perfectly balanced a lightly sweet malt backbone and a mild blend of ctirusy and earthy hops.  It was one of my last beers of the evening and an excellent brew to unwind with.

Once again I had a really great time at NERAX celebrating the joys of cask and drinking some amazing beer.  Definitely check this event out if you can! 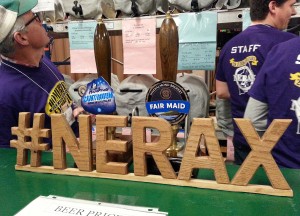 Yesterday I had the joy of attending the opening night of the NERAX 2016 festival in South Boston.  For those who may not know, NERAX is short for New England Real Ale eXhibition, and their mission for the last 20 years has been to provide the New England states with quality cask ale.  If you’ve ever been to a bar or brewery in the region and enjoyed a cask offering, chances are you have them to thank for it.  As for the festival itself, it is running from Wednesday, April 6 through Saturday, April 9 at the South Boston Lithuanian Club (an easy half mile walk from the Red Line’s Broadway stop).  Scheduled to feature over 100 firkins of real ale and ciders over the course of the next few days, the event is a grand celebration of cask beer showcasing a variety of the region’s favorite breweries alongside several others coming all the way from England, Scotland, and Wales.

Before getting into the brews, it is worth noting how this festival was a refreshing departure from others that I have attended.  For starters, it was a lot smaller.  The venue was a large function room/auditorium with a long serving counter at one end and a merch table at the other.  The crowd was fortunately much smaller that I’ve grown accustomed to as well, probably no more 150 or so people in there at any given time (forgive me, I’m terrible at estimating crowds).  This gave the event a much more relaxed and intimate feeling than the larger Beer Advocate and Craft Beer Summit festivals I’ve attended previously.  I heard they get more people and open up some additional space for the weekend sessions, but on my particular night I dare say that I had personal space in which to drink and reflect upon my beer.  The pricing model was also quite different from my past experiences.  Tickets are $5 (online or at the door) for all but the Friday session and another $5 deposit gets you an actual glass for the evening to either keep or return for your money back.  From there you pay as you consume, with different serving sizes available.  You can get the full breakdown of the costs here on their website.  Be warned that it is cash only.

As for the beer, there was something for everyone.  You name the style and they likely had a cask of it; English Milds, Pale Ales, IPAs, Brown Ales, Stouts, and even a Gose or two. On the whole the beers tended to skew towards lower ABV offerings (mainly in the 4 – 5.5% range), though there were a few larger ones lurking out there as well.  I had my share of samples and came across a variety of great brews.  While availability will vary from night-to-night, I do have a few standouts I’d like to mention to help give a sense of what they had to offer.

Beer’d Brewing – Hobbit Juice: This 9.2% DIPA from Connecticut was one of the biggest beers pouring last night and also one of the tastiest.  The beer fared really well on cask, with its abundant hops still standing out atop a smooth malty base sweetened by the addition of fresh raspberries to the cask.

Four Quarters Brewing – French Toast Bear: A 6.0% brown ale by another fine Vermont brewery, this one tasted almost exactly like Cinnamon Toast Crunch.  I suppose that makes a lot of sense given this was created by conditioning their regular brown ale with cinnamon sticks, vanilla beans, and maple syrup.  I could see this getting a bit cloying in large amounts, but my quarter pint sample was sweet delicious breakfast in a glass.

Oast House Brewery – Aber-Dabba-Doo: I took a chance on this offering from a Welsh brewery I’d never heard of based off of the name alone.  What I got was an excellent 4.2% amber ale.  With mild notes of caramel malt and a lightly floral hop finish, I thought this was perfectly suited to cask format.

Monty’s Brewery – Dark Secret: Out of solidarity with my wife there was no way I could pass up a gluten-free cask beer, especially if it happened to be a stout.  Easily one of the best gluten-free beers I’ve ever had, not to mention pretty good in its own right.  At 5.5%, it went down nice and smooth with a subtle roasted malt character.

Spencer Trappist Brewery – Abbey Brown: Coming from Massachusetts’ own Trappist brewery, this was my first time having a Belgian-style beer on cask.  It definitely suited this one well, giving it a nice smooth sweet and roasty taste combined with a perfect mouthfeel.

I would highly recommend this event to any beer enthusiasts in the Boston area this weekend.  Fans of cask beer shouldn’t miss this, and anyone curious to try it out can get no better introduction.  The festival offered plenty of great beer, including some one of a kind creations, and an atmosphere that is hard to come by at beer events these days.  The catering by Redbones BBQ was a pretty nice touch as well.