The next item on my reading list for the year was Mort(e), by Robert Repino.  Published in early 2015, I found out about this book after going through a number of sites counting down the best Sci-Fi/Fantasy books of 2015.  The description sounded kind of out there, but the book kept showing up and something told me to give it a shot.  Maybe I’m a sucker for cool looking cover art. 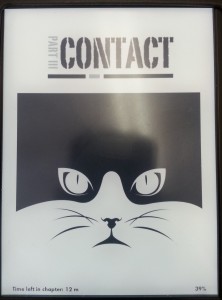 The book is essentially about Sebastian, an ordinary suburban house-cat, caught in a battle between animals and the humans. The Ant Queen, Hymenoptera Unus, has declared war on humanity, and successfully rallied the other animals to her cause.  As Sebastian makes a name for himself as the legendary warrior Mort(e), he finds his heart really lies with Sheba, the neighbor’s dog, who has gone missing.

Still with me?  It sounds kind of crazy when you type it out like that.  To get into this book you have to accept the premise early on and go with it.  If questions about things like how animals can (sometimes selectively) be transformed into humanized creatures and immediately take to using things like guns, cars, and cellphones are going to really bother you, you have come to the wrong book.

There were a few times that I was ready to put this book down, but I managed to stick with it.  Premise aside, the book had a somewhat drawn out start that made it tough to get into.  The story’s peak in the middle was enough to keep me going, but that only provided sufficient momentum to take me through to an ending that really lost me.  Aside from Mort(e), a rather likeable and relatable cat, the rest of the characters fell pretty flat and one-dimensional.  They were for the most part interchangeable clichés of military personnel who, as you were routinely reminded, happened to be animals.  To be fair, back stories were provided for most of the main characters, but these felt kind of forced and flimsy and didn’t do enough to endear me to anyone.

The plot was similarly underdeveloped.  I didn’t really feel any urgency for Mort(e) to find Sheba, and the quest felt more like a device to start the story and march it through to the end, rather than a meaningful tale of friendship.  This is especially true once the story gets sidetracked into a military adventure.  Also, the book’s two biggest messages failed to make an impact.  Along the lines of Animal Farm, though without its cohesion or strength, one of the book’s main themes was that the animals may turn out as bad as the humans they were replacing; however, since the animals were humanized throughout and never shown to have aspirations to higher ideals, this revelation lacked substance.  Similarly, the book’s religious theme fell flat and felt disconnected from the story as it was insufficiently developed and mostly incoherent.  I think the author had something he really wanted to say here, but that message was ambiguous at best.

As a regular Sci-Fi reader, I am definitely willing and capable of suspending disbelief to get into a story, but this particular one did not offer me enough to do so.  So now I am left confused.  Considering how I found out about this book, obviously a number of people out there liked it and it has met with some critical acclaim.  If you’re curious or on the fence about this one, read some other reviews to help you make up your mind.