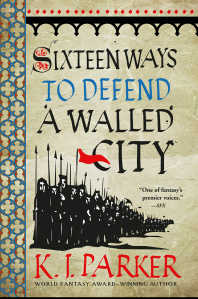 This next read was one of my most anticipated anticipated books of the year.  Published in April 2019, this fantasy novel had my interest the moment I saw the title!  It immediately brought to mind one of my favorite aspects of my much loved Total War series of computer games and I couldn’t wait to see how that would be put to page here.  Also of note, this is my first time coming across this author.

“According to the books (there’s an extensive literature on the subject) there are fifteen ways to defend a walled city…What the books don’t tell you is, there’s a sixteenth way. You can use it when you’ve got nothing; no stuff, no men and nobody to lead them. Apart from that, it’s got nothing to recommend it whatsoever.”

The story is set in a fictional medieval world and told from the point of view of a slick talking Colonel of Engineers named Orhan.  Although many citizens of the empire he serves view him as an undesirable on account of his race and upbringing, he has nevertheless earned a measure of title and respect on account of his leadership skills, engineering prowess, and (perhaps most importantly) shrewd understanding of graft.  His story begins at an imperial outpost where he inadvertently finds himself the sole survivor of suspiciously well coordinated pirate raid and, through a rather eventful chain of events, reports his superiors the particulars of the assault. As it becomes clear that this was only the beginning of an unknown and well prepared enemy’s war on the empire, Orhan returns to his troop of engineers and does what he can to get them as far away as possible from the impending conflict.  It’s not long, however, before some difficult questions and a nagging sense of duty lead him back to the Imperial capital where, as his luck goes, he returns just in time to find the Empire’s standing army slaughtered in the surrounding wilderness and the nearly defenseless city on the verge of being sieged. Assuming command, Orhan must use every last bit of strategy, guile, and engineering know-how to unite the city’s factions and organized a seemingly hopeless defense to buy its people every moment of life possible.

I went into this book with very high hopes and I am happy to say that it did not disappoint!  While it wasn’t quite the grim tale of a desperate and hard fought last stand I originally envisioned, I enjoyed this immensely nonetheless.  That’s not to say there wasn’t any action, indeed there were plenty of scenes with fighting and some deeply satisfying siege/counter siege tactics at play, but the real joy of this book was how Orhan’s personality shone through in his captivating account of the events surrounding the siege.  Informal and often whimsical, irreverent, and darkly humorous Orhan has absolutely no pretense about being an admirable or heroic person and yet often enough nearly succeeds at being both. I liked how he owned and embraced who he was, shying away from neither his faults nor the derogatory “milkface” slurs hurled at him on account of his “chronic skin condition.”  What I found most compelling about him, though, was that he was an immensely capable individual and his tendency to look at the siege as an engineering problem really brought an intriguing perspective to narrative; not just in how he went about defending the city but also in how that outlook shaped the way he interacted with the people around him, enemies and allies alike.

For a brief note on the other characters, there were plenty of fascinating personalities scattered throughout the narrative.  This was without a doubt Orhan’s story, but it would not have been complete without some equally compelling individuals around him.  Lysimachus, a charismatic street tough with a penchant for carrying out impossible feats; Aichma, daughter of Orhan’s long deceased friend and tough as nails owner of a prominent tavern in the city’s less reputable area; and Sawdust, a former slave respected by all for her carpentry and design skills were particular favorites of mine.  The leader of the enemy camp was also an impressive character as well, but I think they are best left for the reader to discover!

On a slightly different note, I also really enjoyed how the issue of Orhan’s reliability as a narrator is brought to the forefront at the end of the novel by an excerpt from a future historian’s commentaries on his narrative.  It drew attention to Orhan’s penchant for lying, the (arguably) self-serving depiction of his central role in the conflict, and the fact that matches Orhan. And this is where things got real. These questions about the validity of Orhan’s story effectively pull the rug out from under the reader.  Not only do they make one rethink the entire account in which they were emotionally invested, but there is also the realization that this idea applies just as readily to our own histories. One common theme of the Hardcore History podcast I’ve gotten into is the idea/realization that even though most surviving accounts of ancient  history are simply not true, or at best unverifiable, we can’t simply ignore them without losing the only links we have to the past (thus giving them great power).  I know that’s a bit of a random tangent, but it was the first place my mind wandered after finishing the story!

Put that all together and I’ll say in closing that I was quite impressed by this book and its depth.  On the surface it was a fun, engaging account of one man uniting a city and fighting against impossible odds, but with only a little bit of digging it becomes so much more.  Go a bit deeper and it offers up some much more complicated questions and analyses of topics like race, identity, duty, politics and the role of the outsider in society (just to name a few).  Add in all the twists and turns of the plot and I can safely say that this book is in serious consideration for being my favorite read of the year. Get this one off of your TBR and into your hands ASAP!