Coming at you all with one more brew from the good folks at Two Villains, this time with a beer my wife and I took home with us. 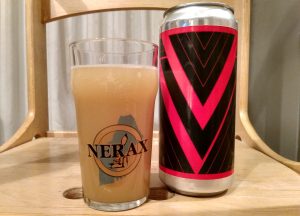 Description: Brewed with oats and a blend of malt, it was then whirlpooled and dry hopped with some of the brewers’ favorite fruit-forward American and New Zealand varieties.

Smell: Burst of sticky tropical fruit the moment I opened the crowler.

Taste: Sweet upfront, beginning with pulpy citrus fruits and apricot before some more mellow melon notes set in.  A nice pale malty/oaty base poked through around mission and was quickly followed a slightly resinous grapefruit bitterness that carried through to the finish.

Mouthfeel: Medium bodied with a moderate level of carbonation.

Hype: High!  My first my time drinking an official Two Villains beer at home that wasn’t a home brew.  I also missed this one the brewery and my wife raved about it on the way back to the car.

Overall: I can certainly understand now why this was such a hit!  Great juicy flavor and just the right amount of bitterness on the end made this one a real winner.

My first brewery experience of the year is also a very special one for the BeerRantsAndBooks family.  The two gentlemen who run operations and make the beer at Two Villains Brewing have been in the circle of friends for many years now and it was absolutely amazing to see them realize their dream!  They officially opened up shop in mid-November of 2019 and my wife and I were thrilled we got a chance to stop by and visit some old friends over the Holidays.

The brewery is located on Main Street in downtown Nyack, NY and sits amongst a row of other storefronts.  There is no dedicated parking, but we had no problem finding ample (metered) public spaces literally right across the street.  Walking in the door you enter a beautifully finished taproom with a very industrial and modern vibe. It was well lit and had a very open and inviting feel.  Wooden tables and benches are spread throughout a rather roomy seating area and a long bar runs along the left wall. Beyond that and behind a short barrier lay the brewing floor with all the tanks and equipment one would generally expect to see at such a location.  The bathrooms downstairs are definitely worth a visit as well. There are four stalls (including one with a changing station), and each of them are wallpapered with old comics. It was a fun touch and great play on the “villain” name.

For the non-beer drinking crowd, they also pack a full bar and offer cocktail specials and have a craft soda fountain as well.  As of this post they are not serving food yet, but that is something that will be happening in the very near future. All I’ll say is that the descriptions of the chef-to-be’s cooking style certainly had my mouth watering! 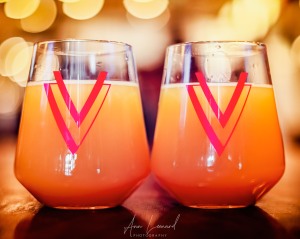 And now it’s time to bring on the beer!  I’ve had the pleasure of experiencing several Two Villains home brews over the years and have likewise enjoyed the stuff they worked on at their previous gig, so I couldn’t wait to dive into the taplist.  There were several beers pouring that day and while I wasn’t going to be able to try them all, I did get a good sampling of what they had available. First up was Gummy World, an 8.5% NEIPA inspired by the brewers’ favorite gummy worms.  This particular batch was brewed with a strawberry and watermelon puree and dry hopped with El Dorado.  The oat/malt bill gave it a smooth base atop which the beer featured a light bitterness and a deliciously sweet blending of the featured fruits throughout.  Definitely an excellent start!

Beer number two was a 5% “Hoppy Norwegian Farmhouse Ale” named Sol Eater.  It opened with a nice wheat and rye backbone, followed by orange and apricot before coming to a rather dry finish with notes of pear and yeast.  This was probably my favorite farmhouse ale in quite some time!

My final full pour of the day was a 5.0% nitro milk stout called Neighbor Cat.  It was everything you could want from the style; light, smooth body and great notes of creamy and roasted malts.  In talking to the guys it sounds like they have some big plans for playing around with this one, so keep an eye out if you’re in the area.

As a bonus beer, I was treated to a sneak peek of a Kolsch they were working on at the time.  I know it’s not really a style people tend to get worked up over, but damn this was fantastic!  Light, super crisp, and featuring a subtle fruity sweetness this tasted like a real winner even when poured from the Brite tank.  It looks like they debuted this for New Year’s Eve, so get in there and get this while it lasts!

And that rounds out a very enjoyable day at the brewery.  I know I am a bit biased on this one, but seriously check this place out if and when you’re in the area.  It’s an awesome space and the beer will most definitely give you something to smile about.

PS – I’d like to add an additional thank you here to my wife, who took on some of the photography duties this visit!