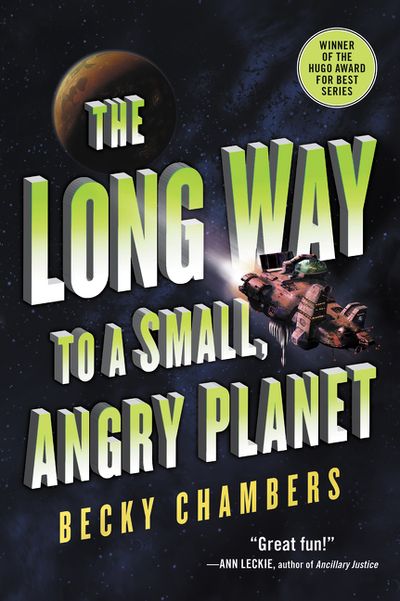 I had been looking forward to this read for quite some time, though for some reason I was slow to pull it off my long list of books to read.  Since being self-published in 2014, and subsequently picked up by Hodder & Stoughton the following year, this series has been consistently featured on numerous must-read lists and blog reviews that I’ve come across in my daily browsing.  Now it’s finally time for me to join the party!

The story follows the crew of the Wayfarer, a small-time space tunneling ship, as they welcome aboard a new member, a Mars-born clerk named Rosemary Harper who, despite her inexperience, is quite eager to leave her past behind and head out into the stars.  Taking advantage of the extra credibility having a clerk apparently lends to their operation, Captain Ashby Santoso secures a potentially dangerous yet highly lucrative contract for his ragtag crew. It’s the same job they’ve always done, but to get there must endure a long flight to a small, inhospitable planet that was until recently the focus of civil war between an alien species whose motives no one seems to understand.

Although this book ended up being way more character focused that I had originally thought it would be, I must say that the diverse cast of alien and human characters made it an incredibly fun read!  They collectively gave me a Farscape-meets-Firefly vibe and their personalities and crew dynamic were certainly enough to keep the long journey entertaining.  I particularly liked the closeness of the crew and the running banter/cultural curiosities that carried on between the alien and human characters.  While each crew member had a chance to have at least some of their story told, the two that stood out the most for me were Kizzy Shao, an extremely extroverted, video game loving, smash-smoking human machine technician, and Dr. Chef, an affable six-limbed Grum who does double duty as ship’s physician and cook.  On the topic of Dr. Chef, and the rest of the non-human cast for that matter, I also really enjoyed the author’s tendency to go a bit further outside the box in terms of alien physiology than most popular Sci-Fi adventures seem to go. I feel like this is something that doesn’t get explored nearly as often as it should.

Beyond the characters, there were a couple of areas in which this book really stood out for me as unique.  Most notably, the concept of gender fluidity and a wide variety of sexual orientations played pretty central roles in most of the character’s stories.  While this wasn’t necessarily as big a selling point for me personally as it has been for a lot of other reviewers I’ve come across, I did enjoy how these different perspectives shaped the story and contributed to the book’s themes of seeking to understand and respect each others’ differences and celebrating our relationships (platonic or otherwise) with the people we choose to include in our lives.  These topics were presented in such a fun, positive way that they added an extra bit of the joy of the read beyond what the characters had to offer.

On the other hand, my biggest criticism of this book is that for a space adventure it did not really have a lot of action in it.  While I appreciate that this was not the main intention of the story, there were a few places, particularly in the middle, where I felt a little bit more could have happened without sacrificing the core of what the story was.  As much as I liked the episodic chapters and slice of life (in space!) feels, a part of me was left wanting for a slightly deeper plot. Don’t get me wrong, I thought the universe was quite interesting and the characters a fantastic group of beings to hang out with, but I feel like we only barely touched the surface of this world and I wish I was able to go farther into it.

With that in mind I am feeling somewhat conflicted about the next book.  For all the fun I had traveling with the crew of the Wayfarer, I was a bit disappointed to learn that the sequel seems to move on to a (mostly) new set of characters.  It kind of feels like I’m be leaving behind a fun group of friends I just met before really getting a chance to know them.  I suppose I am in on the next book, though I don’t feel as excited by it as perhaps I should be given how much I enjoyed this one.  Here’s hoping for a pleasant surprise when I get to it!